Subscribe to our newsletter to get the latest news, discounts and sales.

FREE ECONOMY SHIPPING WITHIN THE US ON ALL ORDERS, ANY QUANTITY, ANY DOLLAR AMOUNT

The placement of the mezuzah at the entrance of a home is an ancient Jewish tradition that is rooted in the holy Torah. It is a small piece of parchment with a prayer written on it, which is rolled and put in a beautiful case that is hung on the doorpost or doorframe of Jewish homes.

The mezuzah like other Jewish symbols serves as a reminder of God's presence in our lives and His protection over us. The mezuzah is not just a beautiful tradition, but a commandment and has deep meaning and significance. The word "mezuzah" comes from the Hebrew root "manzazu" which means "doorpost." The mezuzah should be placed on the right doorpost of the entrance to the homes of Jewish people.

A Messianic mezuzah is used in the same manner as a regular mezuzah, the only difference being the inclusion of the Messianic seal. These mezuzahs are placed on the doorposts of Messianic Jews.

People who are of the Messianic Jewish faith practice their religion by combining early Christian ideas with traditional Judaism. They believe Jesus is their savior, but follow God's word according to the Torah and the New Testament. The Messianic seal shows the Temple Menorah intertwined with the Ichthys creating a Star of David at the intersection. The menorah symbolizes Judaism and the Ichthys symbolize Christianity.

Although there are many interpretations of the holy ritual of hanging a mezuzah, it's crucial to revisit history to truly discover and appreciate the meaning.

History of the Mezuzah 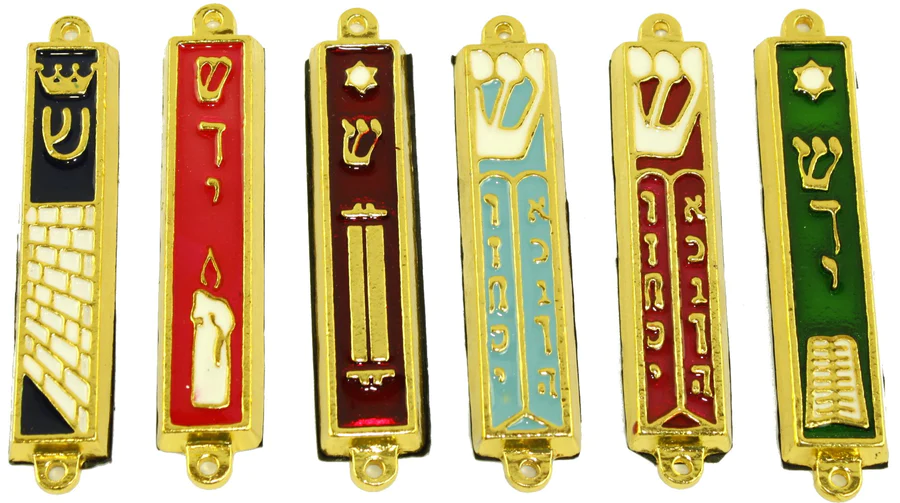 According to custom, the Jewish people have honored the obligation of mezuzah since it was revealed at Sinai in the Jewish year 2448 (1312 B.C.). The word mezuzah which comes from the Hebrew root meaning “doorway” or “entrance” refers to the small case containing a parchment scroll on which are written the words of the Shema, a declaration of faith in God found in the Old Testament.

"Hear, O Israel! The Eternal is our God, the Eternal alone. You shall love the Eternal your God with all your heart, with all your soul, and with all your might. Take to heart these instructions with which I charge you this day. Impress them upon your children. Recite them when you stay at home and when you are away, when you lie down and when you get up. Bind them as a sign on your hand and let them serve as a symbol on your forehead; inscribe them on the doorposts of your house and your gates" (Deuteronomy 6:4–9).

The sacred scroll is placed inside a wooden, plastic, or metal casing that is often quite lovely and creative in appearance. The mezuzah is then affixed to the right-hand doorpost of Jewish homes as one enters. In ancient times it was placed on the outside of the doorframe, but nowadays it is usually placed on the inside. The mezuzah is attached at an angle so that when a person enters a room, the first thing they see are the names of God.

The question of whether mezuzahs were in use during the forty-year trek through the desert is debatable, as the temporary dwellings used for rest were most likely exempt from the commandment. The mezuzah, however, may be assumed to have become a permanent fixture of the Jewish home since the Israelites occupied Canaan in the period 2488–2502 (1272–1258 B.C.) up until this day!

The mezuzah is a religious item, therefore it should not be treated lightly. There are particular commandments on how to construct and install the mezuzah, which is no surprise. One of these laws concerns the scroll that goes inside the mezuzah.

The lettering on the klaf (the scroll placed in the mezuzah) is somewhat of an art form and must be hand-written by a kosher scribe – one who is halachic observant and meets other requirements. The mezuzah case or container, however, does not have any particular demands. It may be purchased or constructed; it can be of any size, shape, or substance (such as a brass mezuzah or a plastic mezuzah).

The scroll is unwound from left to right, with the names of God being the first words to appear. The parchment is placed inside the container, but it should not be firmly sealed because the parchment must be opened and examined twice every seven years to check whether any of the letters have faded or been damaged. After the examination, the scroll is rolled back up and placed in the container.

The Rules of Mezuzah Hanging

A mezuzah should be attached to the doorpost of every entrance to the home, not just the front door. The mezuzah is put up on the right side of the door as you enter. It should be placed at about eye level or slightly higher. The mezuzah is required in any area with two doorposts and an overhead lintel so consult a rabbi if you have any doubts.

The mezuzah should be installed as soon as possible after moving in, and no later than thirty days. However, a temporary residence, such as a hotel or vacation rental home, does not require a mezuzah; nor does an office or business. If you plan to stay in that location for less than thirty days, this is especially true. A mezuzah should be placed in every living area that you might consider a home away from home, particularly if you stay there for more than 30 days.

Finally, if a family is moving and knows another Jewish family will be coming in next, they should not take down the mezuzah from the doorpost. However, if it is a Gentile family moving in next, the mezuzah must be removed. The new residents can then choose whether to put up their own mezuzah or not. It should also be kept in mind that the 30-day mezuzah rule does not apply in Israel. When acquiring a new home, one should attach a mezuzah to the door at once!

How the Mezuzah Placement Is Done

Keep in mind that a mezuzah is God's name inscribed on parchment and so great efforts must be made to ensure that it doesn't fall. It is customary for the head of the household to do the Mezuzah placement himself. The frame must be attached to the top and bottom of the case rather than simply letting it hang. The mezuzah is affixed to the doorpost with nails, screws, or adhesive. If the doorpost is too narrow to hang the mezuzah on a slant, it may be done vertically, but it still must be nailed or glued at the top and bottom.

When you buy a mezuzah case, it will usually come with instructions on the proper way to affix it to the doorpost. Be sure to follow these instructions carefully, as the mezuzah must be placed correctly for it to be considered valid. If you have any questions about the placement of the mezuzah, you should consult with a rabbi.

Why the Mezuzah Is Hung Slanted 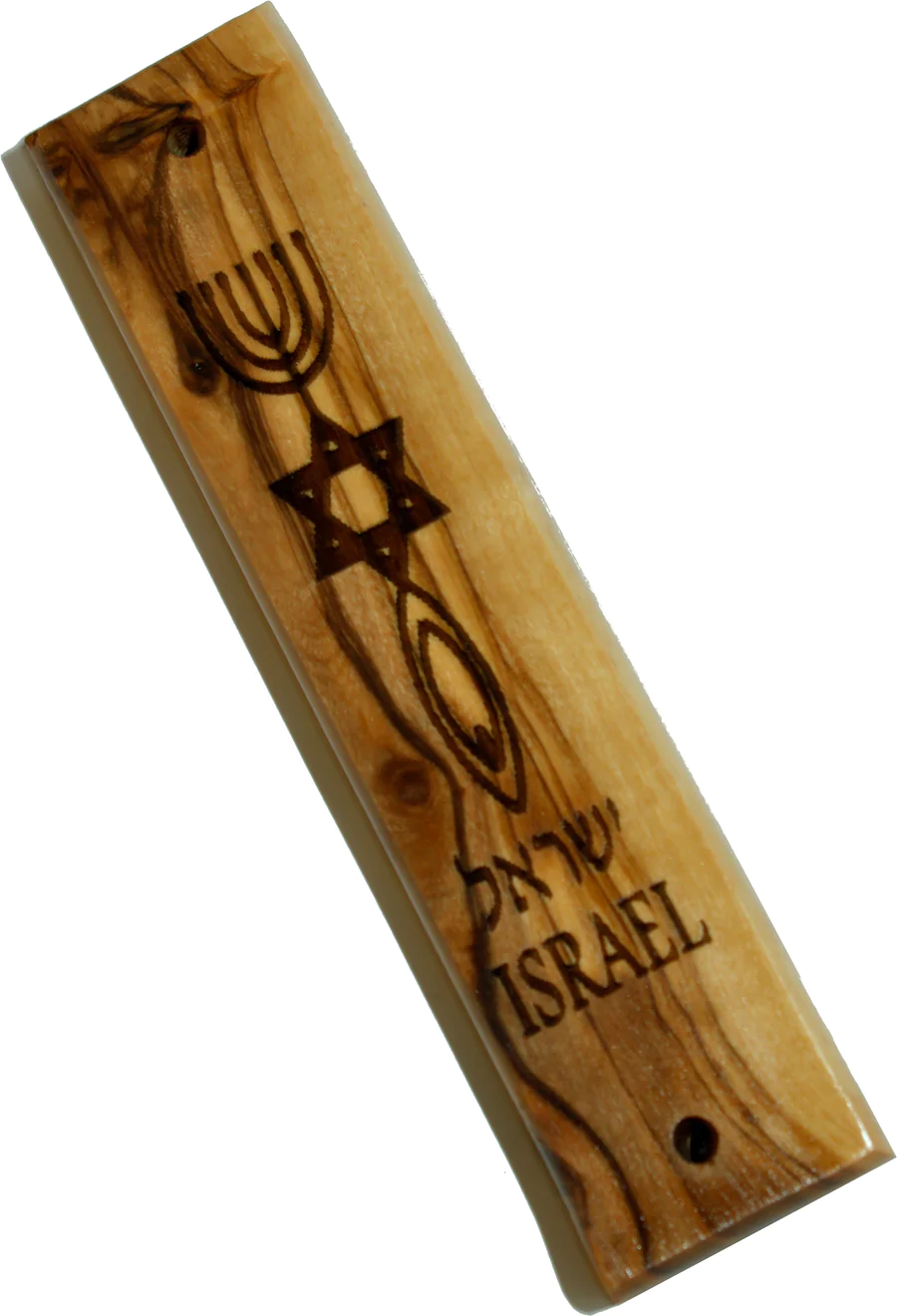 The vertical slant of the mezuzah is a good example of a compromise in Jewish law, Shira. It may appear odd to you, but it's a depiction of two legal authorities coming together in the middle.

When you hang your mezuzah vertically, it's a practice that has been followed for millennia. Rashi, a French rabbi, and commentator who lived during the latter half of the 11th century stated that when you put up your mezuzah, it should be done so vertically. However, Rashi's grandson, Rabbenu Tam, had a different perspective on the mezuzah's placement. Rabbenu Tam was a prominent rabbi during the 12th century and he is credited with writing that a mezuzah should be attached horizontally since in the ark in the Temple, the Ten Commandments and Torah scrolls were kept horizontal.

A century and a half later, Rabbi Jacob Ben Asher brought forth the mezuzah's slanted position as we know it. Rabbi Asher, also called the Tur, finished his book of Jewish law the Arbaah Turim in 1340. According to him, the best method to follow both Rashi's and Rabbenu Tam's precedents is to split the difference by slanting your mezuzah.

After Rabbi Asher, other prominent people have incorporated this viewpoint of the slanted mezuzah placement, including the Rema. The Rema, an Ashkenazi commentator of the 16th century, codified this perspective when he stated that slanting a mezuzah was now the preferred method among Ashkenazi Jews. Some people, on the other hand, still adhere to the custom of keeping their mezuzah vertically hung. Sephardi and Mizrahi Jews are among them.

Today, you'll see both vertical and slanted mezuzahs. The next time you see a mezuzah, look closely to see which way it is slanted. And if you have one at home, take a moment to think about the different rabbis who have shaped this small, but visible part of Jewish law.

Mezuzahs Have No Magical Powers

The mezuzah has acquired the reputation of an amulet due in part to this lettering and in part to some people's natural proclivity toward superstition. Some believe that the mezuzah has magical powers and brings good luck, health, wealth, and success. 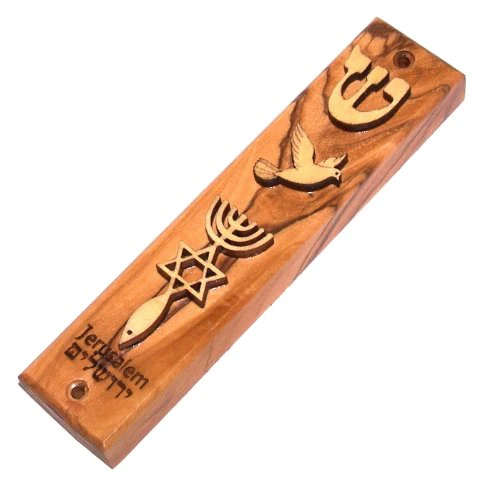 Holy Land Market mezuzahs are produced in the holy land of Jerusalem, with the finest artisans constructing their casings and halachic-observant rabbis writing their klafs. They have been practicing their craft for a long time, learning from previous generations.

With such a wide selection of mezuzahs, you are sure to find the perfect one for your home. They are also great for special gift occasions like a house-warming for friends or family.

Here are some of the benefits you'll enjoy if you buy from Holy Land Market:

Orders are processed on the same day as they are received.

We've been selling mezuzahs on the internet for decades! We have thousands of happy clients all around the globe.

Our mezuzahs are made from the highest quality materials by dedicated crafters of faith.

We offer a wide selection of mezuzahs to complement any decor. We provide a variety of designs so you're sure to discover the one that fits your style.

Learn more about our wide selection of religious and cultural goods from the Holy Land! We are proud to offer an extensive selection of high-quality products made in Israel and shipped around the world. Whether you are looking for rosaries, kitchenware, jewelry, or other items, we have something to suit your needs. Shop with Faith through Holy Land Market!

From the United States

Your utmost satisfaction is our goal

Email us and we can help